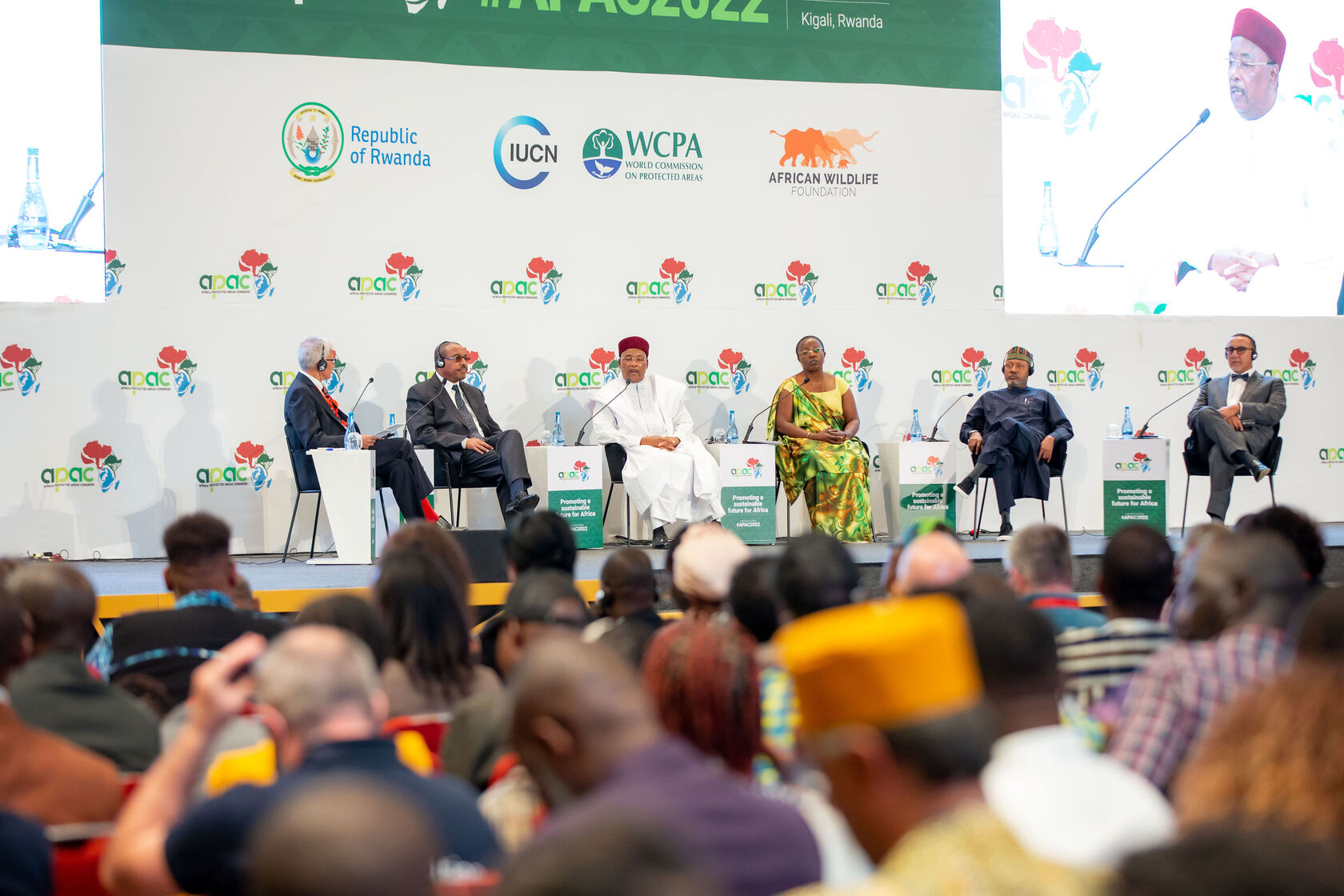 During the dialogue, the youth delegates challenged the two African leaders to champion youth inclusion and engagement in biodiversity conservation through funding of youth programs, dialogue and involvement in decision making at all levels.

The former Heads of State applauded the youth for actively taking up roles in conservation and acknowledged that, ‘the Africa we want starts with the youth, should be defined by the youth and shaped by the youth.’  In addition, they emphasized that no development agenda in Africa can be successful without youth being at the center.

The session concluded with the youth highlighting their asks of the APAC Patrons including :-

Rangers from Zimbabwe, Kenya and DRC feted at the International Ranger Awards

Winners of the second International Ranger Awards, presented by IUCN and WCPA, were announced last evening in a ceremony at APAC. In total, seven individual rangers and three ranger teams from ten countries in Africa, Asia, Latin America, and Australasia were recognized for going beyond the call of duty to protect the earth’s wild places and wildlife, and to support local communities.
African winners of the second International Ranger Award include the Anti-Poaching Tracking Specialists K9 Unit from Savé Valley Conservancy, Zimbabwe; Ali Hassan Ali of the Bura East Community Conservancy and Popote Ole Sapulai of the Kimana Sanctuary, both in Kenya; and the Yyondji Community Eco-guards from the Yyondji Community Bonobo Reserve in the Democratic Republic of Congo.
The International Ranger Awards were established with the support of the International Ranger Federation, Conservation Allies, Re:wild and the Global Tiger Initiative.

How can Protected and Conserved Areas Promote Equity and Rights? Suggested Pathways and Actions at the Africa Protected Areas Congress

Almost twenty years on the from landmark 5th IUCN World Parks Congress held in Durban, South Africa in 2003, the theme of governance, equity and rights remains high on the nature conservation agenda, bringing continuity to this critical theme. The inaugural Africa Protected Areas Congress hosts discussions about governance diversity in the systems of protected and conserved areas, the rights of Indigenous Peoples and local communities (IPLCs), and gender. Read more .

The Africa Protected Areas Directors (APAD) platform is a network open to the representatives of national authorities of Protected Areas operating throughout Africa. APAD was formed in 2020 in response to the unprecedented disruption caused by the COVID-19 pandemic to the management and operations of Africa’s Protected and Conserved Areas.  The APAD platform is open to all African countries which manage protected and conserved areas and invites key leadership within these bodies to join the forum as representatives of their country’s positions and priorities. Since its founding, APAD has engaged 37 African countries of which 18 have endorsed the APAD Declaration, which sets out the APAD vision for Africa’s PCAs.
Today at the sidelines of APAC, they held a dialogue with the 2 former Heads of States H.E. Hailemariam Desalegn and H.E. Mahamadou Issoufou where they provided an overview of their structure, priorities as well as the opportunities and challenges they have. The two heads of state committed to supporting them by lobbying the sitting Presidents in the countries they present to prioritize conservation and allocate sufficient funds to protected and conserved areas.

The African Leadership University in collaboration with the African Wildlife Foundation hosted a panel that explored how biodiversity can contribute to post-COVID economic recovery and what it would take to unlock wildlife economies that go beyond tourism. For wildlife economies to flourish, they need to move beyond the environmental sector into national policy. Case studies from Tanzania and Kenya were discussed and challenges were highlighted, including the need to break down silos across government and develop better data and processes for monitoring markets.