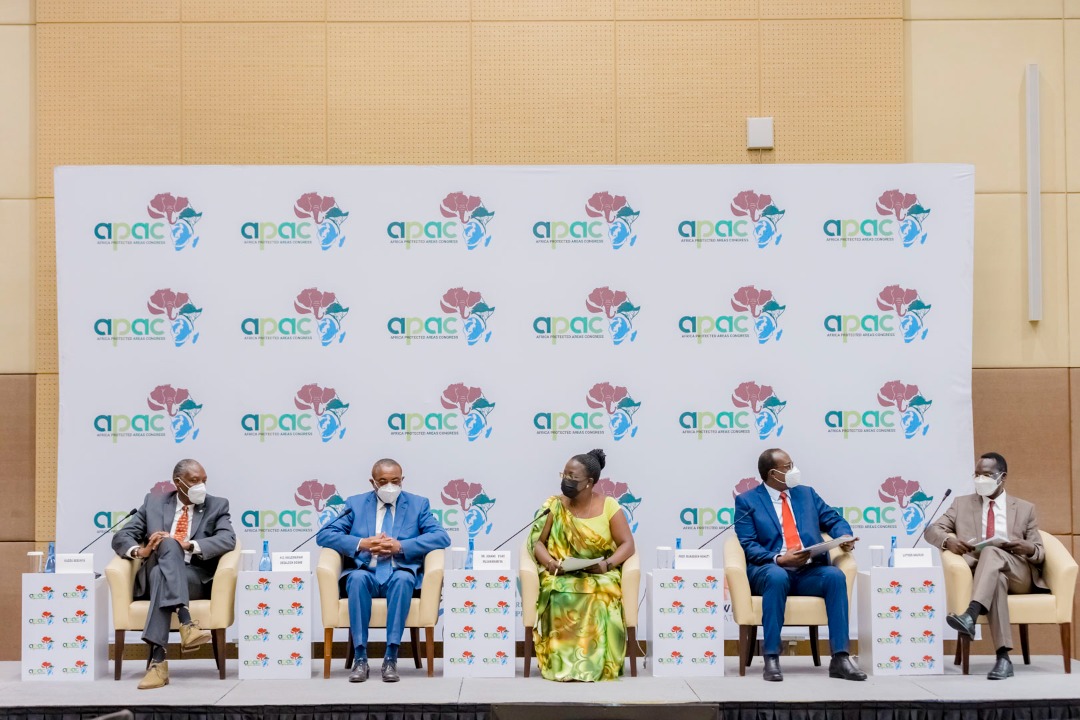 The APAC Congress which is set to be the first ever continent-wide gathering of African leaders, citizens, and interest groups aims to discuss the role of protected areas in conserving nature, safeguarding Africa’s iconic wildlife, delivering vital life-supporting ecosystem services, promoting sustainable development while conserving Africa’s cultural heritage and traditions.

In his acceptance speech during the unveiling, H.E Hailemariam Desalegn said: “APAC presents an unparalleled opportunity to chart a path that balances economic growth with conservation of Africa’s natural capital. This will need to be done through strategic choices and investments driven by the best available knowledge and long-term thinking. I am therefore very pleased and honored to be joining my peers in leading this conversation through our patronage. Africa’s potential is enormous, and we believe that this Congress will be a stepping stone towards achieving our 2063 goals as a continent.”

The IUCN-APAC is convened by the IUCN-World Commission on Protected Areas in partnership with government agencies and conservation organizations with the support of development partners, corporate business, communities, and the media.

In an acceptance video, H.E Issoufou Mahamadou said: “The ability of leadership at all levels to be discerning and empowered is critical in shaping decisions that will affect Africa’s future. APAC seeks to deliberately foster dialogues that build and empower the current and the next generation of leaders to realize an African future where biodiversity is valued as an asset that contributes to development. This is why I am very happy and excited to accept this honorary position as a Patron of the inaugural congress that is intended to change the face of conservation and spearhead climate change mitigation efforts on a large scale.”

H.E Festus Mogae in his acceptance video reaffirmed that: “APAC must be a turning point for the relationship between the global community and African institutions. As Africans, we recognize the pivotal role the global community and international organizations have played over the last 60 years.  It is necessary for African communities and institutions to be actively involved in the conservation agenda for ownership and integration within the aspirations and vision for the Africa we want. I am thrilled to accept my role as one of the patrons at the upcoming Africa Protected Areas Congress to ensure the representation of African communities at this crucial time in our African history.”

An IUCN Member since 2016, Rwanda is proud to take up the global conservation leadership mantle and become the first African country to host the IUCN African Protected Area Congress. Rwanda has over the years demonstrated leadership and vision in defining a vision for growth in Rwanda that sustains people and nature.

Speaking at the unveiling of the APAC Patrons, Minister of Environment, Rwanda, Dr Jeanne d’Arc Mujawamariya said that, “It is critical that all African nations and leaders walk this journey together. The Africa Protected Areas Congress comes at a time when there is growing global attention on our strained relationship with nature. We are not investing enough in the natural systems we depend on. US$700 billion more is needed for biodiversity each year, less than 1% of global GDP. Africa spends less than 10% of what is needed to protect and restore nature. Protected areas must have access to the financing required for effective management and thus fulfill their role in providing essential biodiversity protection and ecosystem services for people and development.”

The congress is anchored on three key themes Protected Areas, People and Biodiversity as it seeks to deliberately foster dialogues that build and empower the current and the next generation of leaders to realize an African future where wildlife and wildlands are valued as an asset that contributes to development.

Also speaking at the launch, AWF CEO Kaddu Sebunya said: “Under the leadership of President Paul Kagame alongside the three Patrons and former Heads of State, we are confident that APAC will provide the best opportunity for elevating the plight of conservation and protected areas across the continent’s leaders.  This is why at AWF, we have made it our primary responsibility to support African governments and people willing to chart futures that embrace wildlife and wild lands, hence our partnership with the Government of Rwanda and numerous governments across the continent. We believe that with our rich biological diversity, Africa plays a critical role in global conservation efforts and biodiversity conservation is most effective when we maintain healthy, functioning, and intact ecosystems.”

Through the congress, there is renewed hope to achieve African leadership commitment towards creating a unified African voice in conservation that will value African people and nature through effective protected areas.

In his address, IUCN Regional Director – Eastern and Southern Africa, Luther Anukur said: “Building on the IUCN World Conservation Congress Marseille manifesto, the Glasgow COP 26 outcomes  – Positioning nature and climate as two sides of the same coin, Protected and Conserved Areas play an important role in securing the resilience of ecosystems for which Africa’s economies and people depend upon. APAC is a joint effort of African leaders and multiple partners seeking to contribute to African Union’s Agenda 2063 of an integrated, prosperous and peaceful Africa, driven by its own citizens and representing a dynamic force in the international arena. With the commitment from the government of Rwanda to host the event and the leadership of His Excellency Paul Kagame alongside other Africa leaders, there is no doubt that the inaugural African Protected Area Congress will be a success.”

The overarching objective of the IUCN Africa Protected Areas Congress (APAC) is to position Africa protected and conserved areas within the broader goals of economic development and community well-being and to increase the understanding of the vital role parks play in conserving biodiversity and delivering the ecosystem services that underpin human welfare and livelihoods. The APAC congress organised jointly by Rwanda government, AWF and IUCN will be held at the Kigali Conference Centre in Kigali, Rwanda from 7th to 12th March 2022.

African Wildlife Foundation launched a series of events in October 2021 celebrating its 60th Anniversary. Founded in 1961 to focus on Africa’s conservation needs, AWF articulates a uniquely African vision, bridge science and public policy, and demonstrate the benefits of conservation to ensure the survival of the continent’s wildlife and wild lands. AWF is the primary advocate for the protection of wildlife and wild lands as an essential part of a modern and prosperous Africa.